54 Drone Incursions were spotted at the Super Bowl

“I’m not saying any of them are nefarious, but just think about it. All they need is access,” said William Bryan, the acting under secretary for science and technology at Homeland Security. The department stated that law enforcement working at the Super Bowl ended up dealing with 54 drones.

Authorities stated that they were ready to take down any unauthorized drones that got too close to Atlanta’s Mercedes-Benz Stadium. One of the hardest problems to solve leading up to the event was for security officials to determine how they would react to any breach. The protocol took the Atlanta Police Department and the Special Weapons and Tactics six months to figure out how they would handle the problem.
The roof of the stadium was open for the game, which added more risk to drone activity. A pilot could just fly up over the stadium, and the security officials knew it. They utilized Counter Unmanned Aircraft Systems (C-sUAS) like DroneBuster (see picture below) that can actively jam a drone, breaking the communication link between the aircraft and its pilot. Other type systems can take over the drone where the jammer can then land the system. 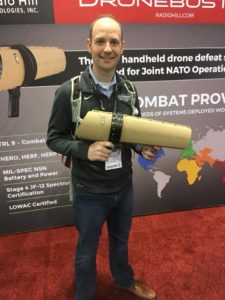 Though no aircraft was found malice, 54 drones within the airspace that were not authorized is a problem. Homeland Security officials will continue to see more and more breaches of drones into classified and restricted airspace at these types of events. New systems will identify them within the airspace, but few departments will know how to handle them.