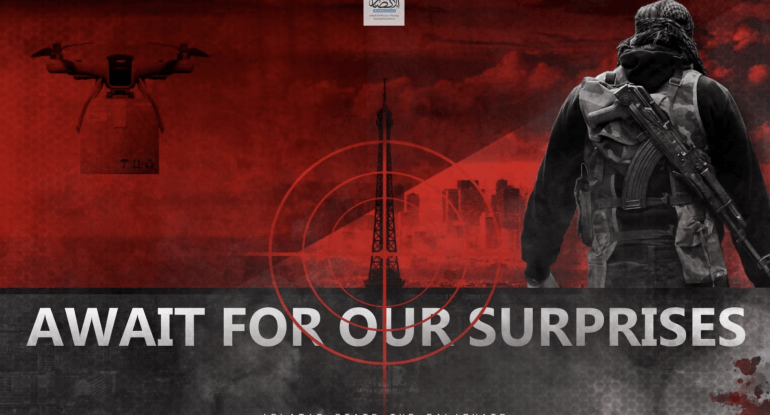 Commercial off the shelf drones are easy for hobbyists to buy, but it also increases the potential of bad actors using the same aircraft. On October 11th the FBI and Department of Homeland Security (DHS) along with the National Counterterrorism Center briefed congress once again on drone threats. In August they released a bulletin that stated: “An attack could be conducted by one person on several people using a commercially available, off-the-shelf [drone] to target venues which attract large crowds, such as sporting facilities, concerts, and transportation terminals, or public figures.”

“Danger from weaponized drones is real,” said Kirstjen Nielsen, through a tweet.

Many have cited the August 4th attack on the Venezuela President as an example of potential techniques. On October 11th further treats were published by ISIS where a poster from Muharir al-Ansar displays a drone with a large package under it flying towards the Eiffel Tower and the words “Await for our surprises.”

As Secretary Nielsen has stated in the past “terrorists and criminals are already using drones to surveil, smuggle, kill and destroy and our country is in the cross-hairs…we are in the early stages of seeing the terrorist use of drones and UASs for swarm attacks, explosive delivery means, and even assassination attempts.”

Officials have stated in the past that these emerging threats are outpacing defenses. Public safety officials need to begin to look at their response procedures and how they will work to create active and passive defenses to identify bad actors. This emerging threat will continue as a low cost, high pay off a concept for the foreseeable future.